Go to the accelerated mobile version

The winter solstice or Willkakuti is celebrated in Tiwanaku on every June 21st. This date marks the Aymara New Year or Machaj Mara; it also marks the beginning of a new agricultural year. The winter solstice indicates that the earth is at its farthest point from the sun. 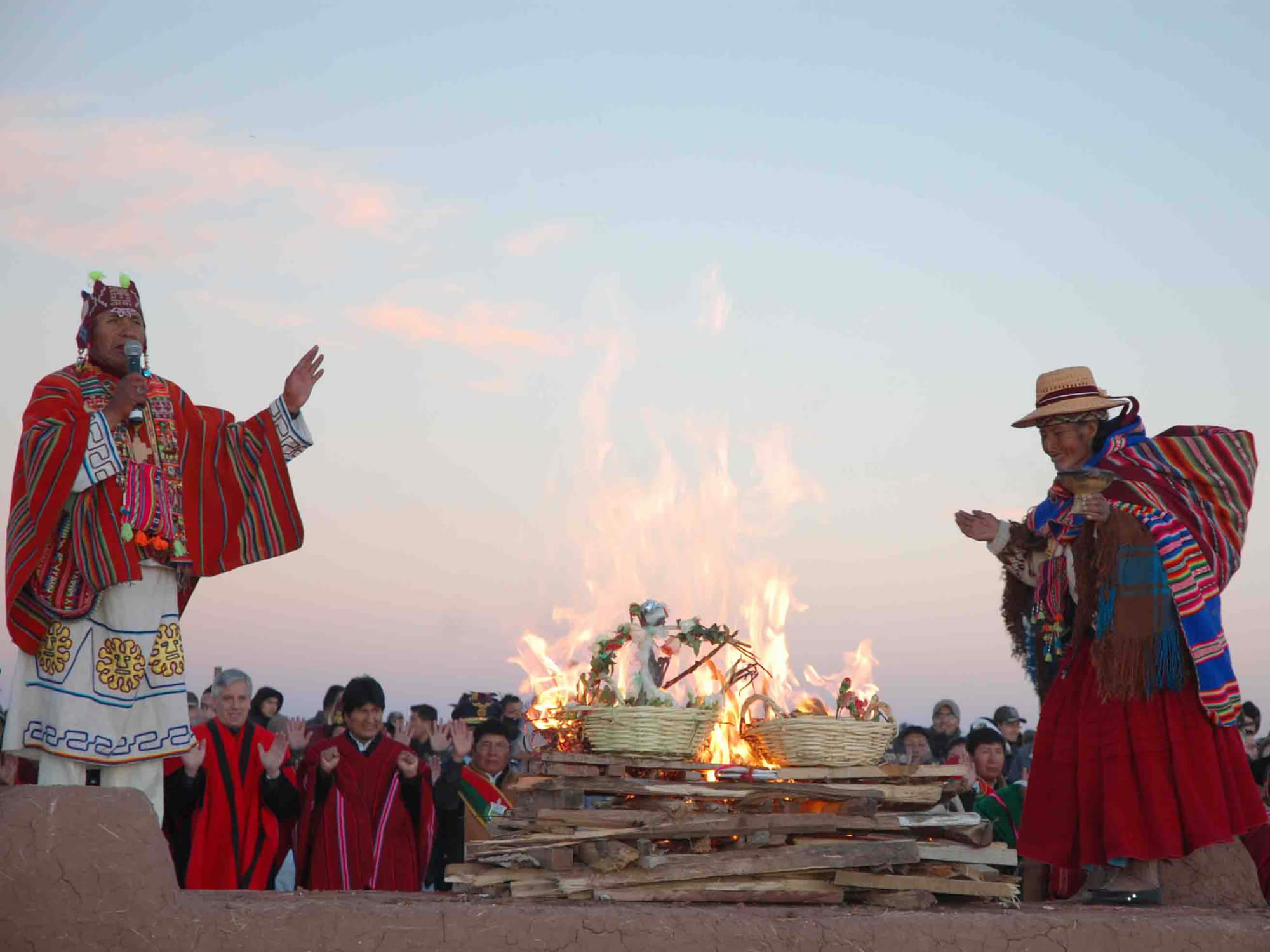 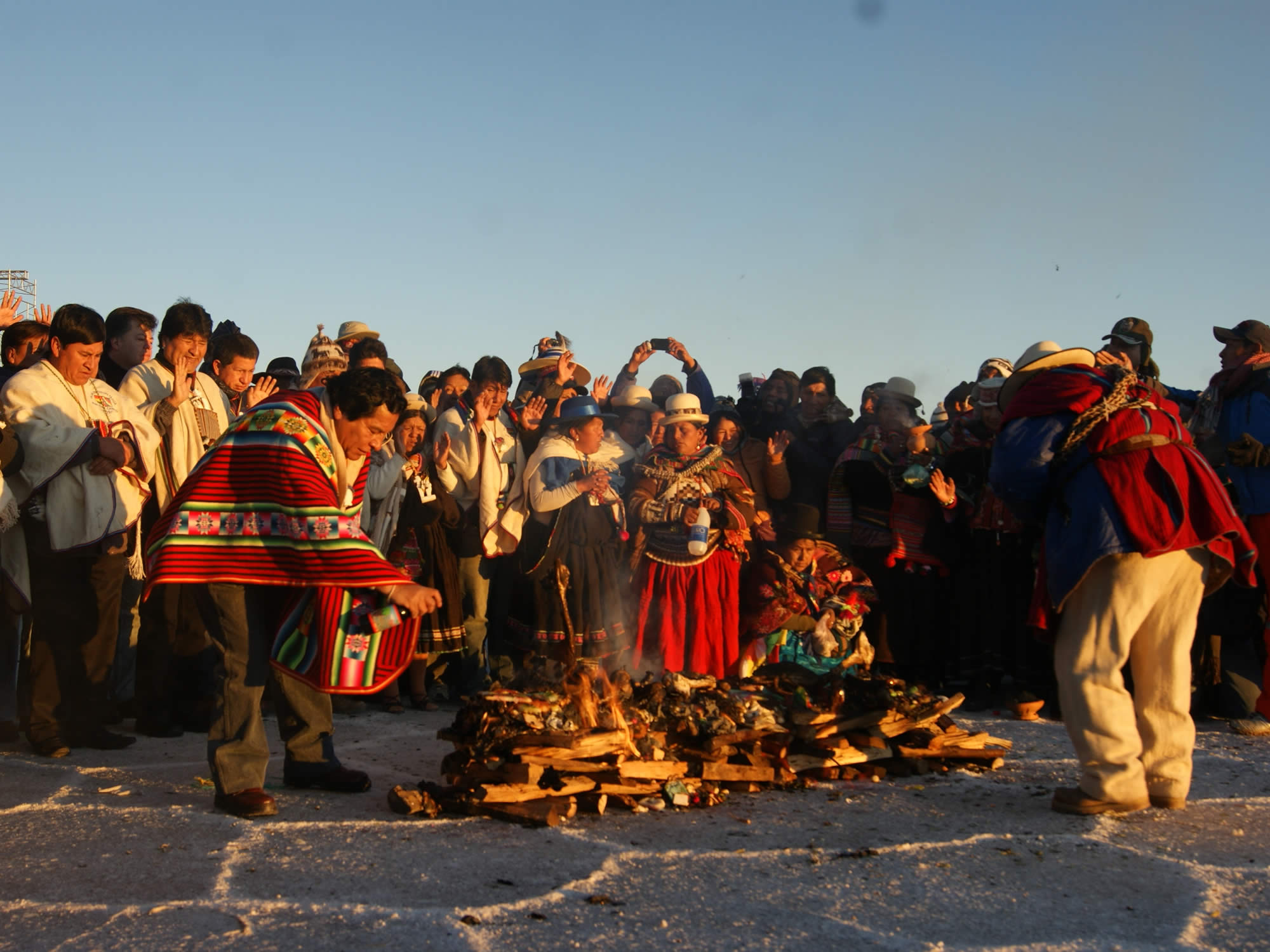 The most important celebration of the winter solstice takes place in Tiwanaku Town, every June 21st. This date marks the Aymara New Year or Machaj Mara; it also marks the beginning of a new agriculture year. Also known as Willkakuti, the Aymara New Year is celebrated at more than 200 locations in Bolivia, among them Inkallaqta, Inka Raqay, Samaypata and Uyuni.

For the Aymara people who inhabit the high plateau region of Bolivia known as the Altiplano, this is their holiest day. It is also a national holiday in Bolivia.

Places where you can see the traditional winter solstice celebrations:

The winter solstice indicates that the earth is in its farthest point from the sun. In the southern hemisphere it marks the beginning of the lengthening of the days. In pre-Colonial America, the native peoples of the Andean highlands depended on agriculture and their agricultural rituals were carried out to obtain the blessings of the gods, above all the Pachamama (Mother Earth) and Inti (Father Sun), to ensure an abundant harvest. The Quechuas and Aymara celebrated two annual festivities: the planting season and the harvest, coinciding with the summer and winter solstices. Some Amazonian tribes also celebrated the solstice, with other rituals and in a different manner, each according to their customs. 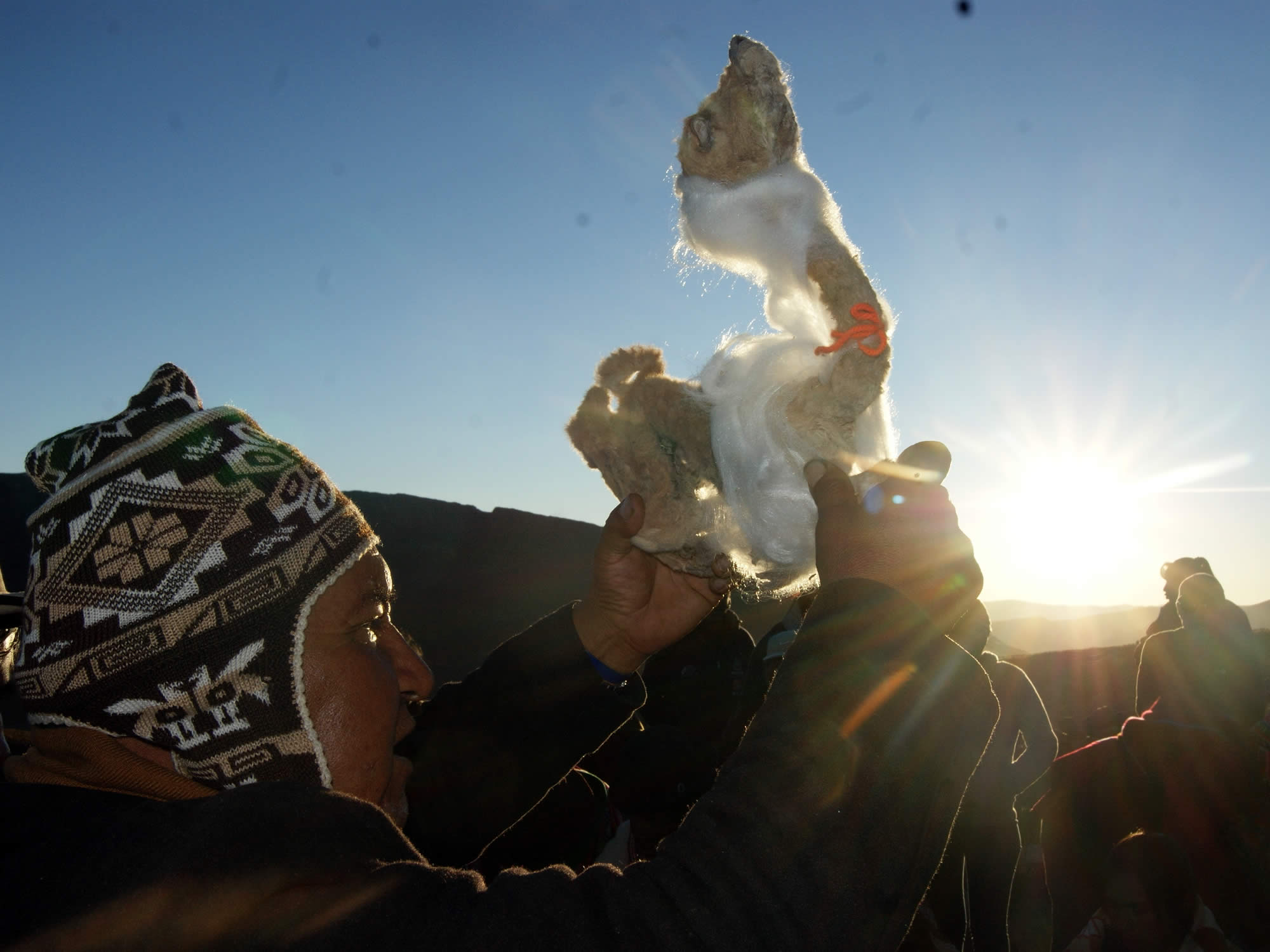 Tiwanaku (or Tiahuanaco) is recognized by Andean scholars as one of the most important precursors to the Inca Empire, flourishing as the ritual and administrative capital of a major state power for approximately five hundred years. It is the most important site for this celebration. People flock from all over the world to watch the rays of the rising sun shine through the temple entrance on the eastern side of the complex. Locals celebrate the Amayran New Year by wearing colorful ceremonial clothing, drinking singani, chewing coca, sacrificing llamas and dancing until dawn. Tourists are welcome to join in the celebrations and can purchase local art from the artisan stalls set up to coincide with the event.

The Amautas (Andean priests) celebrate a gratitude ceremonies to the Sun and the Pachamama (mother earth) for the crops received to feed their people this celebrations are perfectly integrated to the Bolivian culture and starts with the first sunlight sparks on June 21st , the light inspires the hope of a unity between the Universe and our hearts, that provides joy in life in the sacred journey.

The ceremony includes chants, rituals and offerings to the sun and to the Pachamama to assure prosperity and fecundity the rituals are a remembrance of the ancient aymara communities practice.

Every year on June 20th night a convoy of tourists and students departs from La Paz city towards Ingavi province to receive with the first morning light the new Andean year in Tiwanaku, many authorities travel as well to inaugurates artisan fairs, and participate at Kalasasaya Temple of the wajt'a ceremony ritual to get the Apus and Pachamama permission.

Few minutes before 06:00 at the demi-underground temple in Tiwanaku archeological centre the burn of the 4 ceremonial tables will start. The first sunlight will be awaited at the Sun gate (Puerta del Sol) around 07:00, this instants are considered perfect to receive the cosmic energy of the sun.

More than a thousand aymaras participate of the Andean new year celebration with rituals and offerings in Kalasasaya temple and at the Sun gate the most important Tiwanaku archeological remains.

The winter solstice is also celebrated in Cochabamba archeological ruins and in Santa Cruz at Samaipata fort at Bolivia east area.

The Willkakuti or return of the sun is celebrated on June 21st in the pre-inca ruins of Tiwanaku. This ritual is known as the Aymara new year. The return of the sun symbolizes the reception of renewed cosmic energies and also the beginning of the new agriculture cycle.

The Aymara New Year traditionally starts at the sunrise on the day of the solstice and is received by drums and quenas: the ancient sounds of Bolivian music. Each year more than thirty thousand people gather to witness this ritual.

The ceremony takes place in the esplanade of the semi-subterranean temple of Kalasaya, cradle of the oldest pre-Colombian civilization of America, the Tiwanakotas.

With arms extended to the sun, thousands of Bolivians welcome the arrival of the Aymara new year with ancestral rituals. In the mythical Gate to the Sun they wait for dawn to begin with the first rays of the sun the rituals of devotion to their gods.

Dressed in their typical costumes, the Aymara priests lead the religious ceremony, in which they offer gifts to the Sun and Earth, divinities in the aymara religion.

The Willkakuti Ritual or Andean New Year is lead by Mallkus, Apu Malkus and Mamatallas (Andean priests and elders). The celebration is divided in four main stages:

What to bring to Winter Solstice Celebration

Similar celebrations to that of Tiwanaku take place in the city of Copacabana, province of Manco Kapac and the sector La Cumbre, with the coming of the Yungas (afro descendants) to La Paz.

Also in Pampa Aullagas, department of Oruro, the Fort of Samaipata in Santa Cruz with the "Yasitata Euasu" (star of dawn) and the Inkarakay peak in Cochabamba, where there are still pre-inca ruins.

The Willkakuti, known as the Aymara new year, is celebrated on June 21st in the pre-inca ruins of Tiwanaku.

Problems with this festivity:

There are only about 2 million people in Bolivia who identify themselves as Aymaras, and many of them are actually mestizos. Almost nothing is known about the Aymara culture as they have no written history and very little archeological evidence of their culture has ever been found. They were conquered by the Incas and deported as slave labor to the Inca Empire. Even the name "Aymara" is actually a Quechua word used to describe natives who are not Quechua. The word is not original to their true ethnic identity. There is actually no evidence that the origins of this festivity are Aymara. In addition, the location where they now celebrate this Aymara New Year, the ruins of Tiwanaku are not Aymara ruins. They belong to the Tiwanakotas, a very different and much older culture. Also there is concern that the ruins will be damaged by the crowds.

Recent reviews of this article

It was surreal climbing off a bus in pitch darkness, into a remote Bolivian town in the middle of the night, only to be thrust into the fiesta itself. Due to us being over 3000 metres above sea level, it wasn’t surprising to find the mercury hovering around -5 degrees celsius as our bus parked among hundreds of others just after 4:30am. Wrapped up in as many layers as physically wearable, we stepped off the bus into the freezing night air.
Jack Spiegel, United States
2018-06-14 10:47:23

Send us some details so we can start creating your tailor-made trip. Or if you would like to speak to us directly, call us via Skype or Whatsapp.